Shake ya ass, but watch yourself

Posted on February 4, 2016 by tattooagogonola

The FEAST of FAT is upon us…we shall play the flutes of poison King Cake babies as we serenade the Voodoo Queen’s twerking ass while toasting Bloody Marys in our Zulu coconuts—–HOT like KAE-ANN, suckin’ dem crawfish headz screamin’ “AYYYEEEEEEEEEE!!!” TRow me sumtin’ mista!!! Let’s laissez les bons temps rouler dis bitch all da way to ya pa-raid ladder seat on St. Charles. Put ya fake ass titties back in ya bra, brah…ALL YOUR BASE ARE BELONG TO US!!!!!!!!!

Now, that I have ur ummdeevided attention…hear ye, hear ye, tee honorable Vader has rissennth too account dis year of our Lard, 2016th, and fulfill da prophecy of da Mystical Krewe of Tattooagogo. Prrease keep your chirren at bay, sock out with your jocks out, and leave your slimy mermaid stories at home wit ya mom n’ dem. So, without further adieu,  you are hereby commandered to pay close attention to said candid stories of our Artistas, Float Riders, (bee-low) and all their embedded hieroglyphics that will anoint your soul to Satan, or Moesha (the crackwhore who hangs out on Esplanade in Treme).

On our 1st float “Da Rajin Cajin,” Float Duke, da Lafitte Crocodile Hunter, betta known as Strawberry Toefill is Crikey mad with his ‘lil booger (as seen on left). If ya don’t believe me, ask him for his best Steve Irwin impression, ya won’t be disappointed, mate. I [still] Can’t Believe It’s Not Butter…yet TJ is still spoonin’ icing on a few worthy earthlings.  As of late he has worked on a ‘lil African bird, rose progress on Rickey, filled some space on Justin with a tiger head, knocked a traditional tiger out da park, Pinky Yun design, for a 1st tattoo.  AND last but least TJ got his uber-pasty white thighs manicured by Mr. Matt.

“If I pull the arrow out, will you p-please s-suck out the poison?”

On our 2nd float “Mrs. Esterhouse’s Food Truck,” Float Captain, Kenny “Eggroll” Rogers, knows when to hold ’em, knows when to fold ’em, knows when to walk away. But you should still “Keep your eye on the fruit…” as you never know when you’ll accidentally shoot yourself in the ass with a poison arrow (as seen to right). In between the fryer & grill, Kenny still makes time for his pretties as with recents like  a nerd tattoo on his bae, trippy owl, higgs, new work from #teamacid flash, a classic heart & dagger, gnarly tiger chest piece, and a ‘lil Elvis that “got all shook up!!” And on top of these mighty greats, he has posted a shit-ton (that’s an analogy for “a lot”) of new flash on Insta page. Check it, Yo! 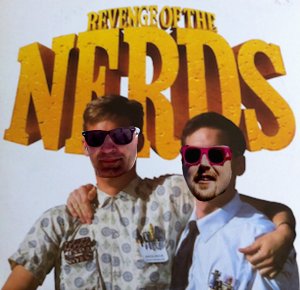 On our 3rd double-decker float “We’ve Got Bush!!!” Grand Marshall(s)  Lewis Skolnick aka Matt and Gilbert Lowe aka Scott (as seen left) are livin’ the Mardi Gras dream, Tri-Lambs style, sadly without Booger & Toshiro but nonetheless still chanting the sutra of “Jocks only think about sports, nerds only think about sex.” When they aren’t hosting belching contests, In Scott’s arsenal chiseled a few like a wolf head, Ed Roth influenced monster slamma jamma, canoe memorial, Sailor Jerry mermaid, a Navy ship tribute, awsum traditional head piece, and some new flash to checka out. As for the Matt, he’s been the shop busy bee drillin’ honey nectar like a anchor & rose, magic oyster, healed look on a seahorse & a dragon neck tattoo, tradtional mash-up “breathe,” lil fishy foot, a crawdad, a rose of No Man’s for another neck tattoo. Chec Matt’s Insta for plenty more, ya heard meh?

And finally on our King float “Imaginarium of Doctor Parnassus,” King Tut Donn (as seen on right with Queen Deadbolt on left) now possesses the keys to NOLA and his first order of business is to FREE THE TA-TAs!!! This epidemic of cancer protection has gone on far too long. So from this day forward King Donn says “let’em hang, free in da wind.” So go forth, bra-less wonders…And if anyone asks why, just tell them We said So. When King Donn isn’t saving cancer, he’s leaving his mark on the almighty parish(es) with a lil work like making progress on a lil old Ryu, a Koi/Ryu cover-up, more Japanese back piece work,  a day of the dead elephant, and a nice lil sailboat to sail away from.

And with that, we wish y’all a very Happy & Safe Mardi Gras! Catch lots of Beads, Buzz, and Ass. And if that doesn’t work out for you, well WTF?! We live in the best city on the planet, go discover your own darkside.

Aside | This entry was posted in Uncategorized. Bookmark the permalink.